EOTD and Outfit: Halloweenparty at Enchantra

When Enchantra decided to throw a halloweenparty, I was immediately excited: I love dressing up and halloween is one of my fav holidays. Even though it's not celebrated in the Netherlands :P

Linda had asked if Siney wanted to do tarotreadings for everyone who was coming, so he would be part of the entertainment. I decided to go for a simple outfit, because all of my Fantasy costumes have wings and such and are NOT suitable for indoors. And besides, I wanted to be comfortable in the train, which we have been in for 7 hours total!
Anyway, I thought it would be fun for me and Sid to go as matching outfits, so we went for gypsies, since it would look good with the tarotcards :)

I totally forgot to take ANY pics, so these are all made at home around 22:30 at night, when I was really tired. So don't mind the halfrubbed off eyebrows and the without-using-a-mirror-applied-lipsick. ;)

Most of my outfit came fom my own closet. The ausbrenner velvet skirt was selfmade years ago, aswell as the satin underskirt that made it a bit more poofy.
The top, I made the friday before the party, because I decided that bare shoulders would be a bit cold in octobre, even though its more of a gypsy style.
The corset is from my own closet. The scarfs, both came from my work, Takko.
The silver necklace and the silver bells hip[chain were both from my own stash, I bought the silver hooprings, because Ive never worn any earrings like those before.
Oh and I had a little silver hoop in my nose, from my own stash aswell.

Simple, but it worked :) 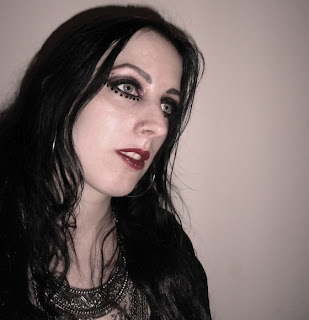 When we just sat in the train to go to Enchantra, the ticketguy told us two other people that were dressed up were in the same train. So around Amsterdam Sloterdijk, we got together with Agnetha and Linda. (It's also where Sid discovered Starbucks!)
They were both dressed in pretty selfmade dressed and did their makeup in the train.(And for some reason a little kid wanted to take a pic...of Sidney!?) It's fun to watch other people doing their own makeup, because everyone used different techniques.

My own makeup was pretty simple, I had to go out of bed pretty early, so I didn't want to have to do too much that early. I'm not a morningperson :P 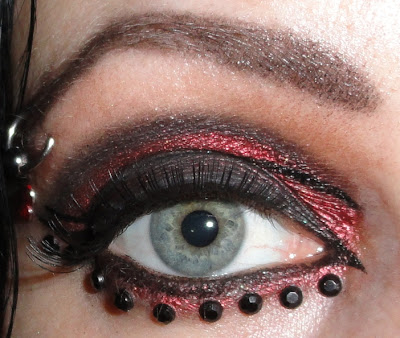 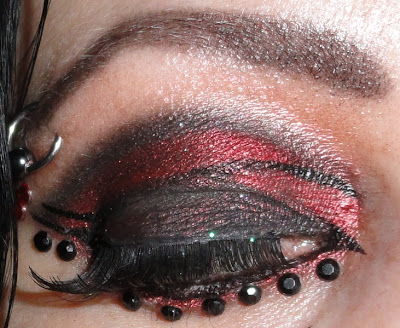 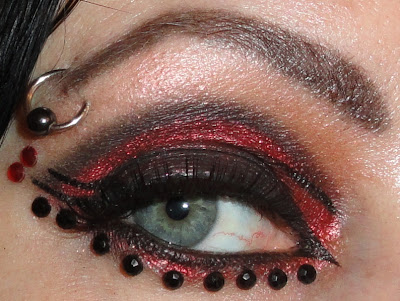 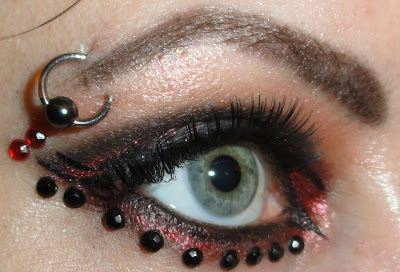 For some reason, Fox really liked Stella, which made my moving eyelid a mix of the both. I didn't really mind, because it still looked good. Also, when I was home, I saw that my other eye's fake lashes was loose in the middle. No idea how long ago that happened. Oops! :)

On my lips I has Sleeks true colour lipstick Cherry, and some Light Burgundy blush by Catrice on my cheeks.

I found some pics online of us, mostly Sid, because I did my best to avoid cameras :P You could have taken your pics by a proffessional photographer upstairs at Enchantra, which I was asked to do a couple of times, but I'm not someone who loves posing for pics. Most of the time I end up looking really werd, hahah.
I'm not sure where I found every pic, so If one of them is yours, please let me know and I'll share your name/blog. 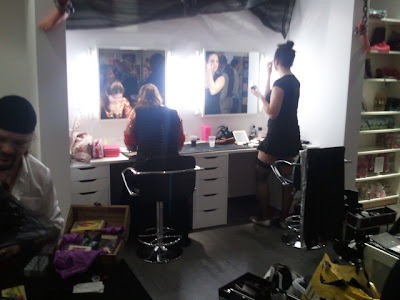 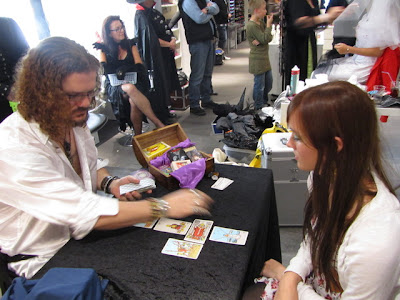 I want to thank Linda and Robert for a great party, and ofcourse everyone else for the amazing company. I had fun talking to all of you :)
Agnetha and Linda made the long(er) trainride back seem a lot les long and it was a lot of fun meeting them and talking to them for hours.
I think everyone had a great time, and it's definately something to be repeated.